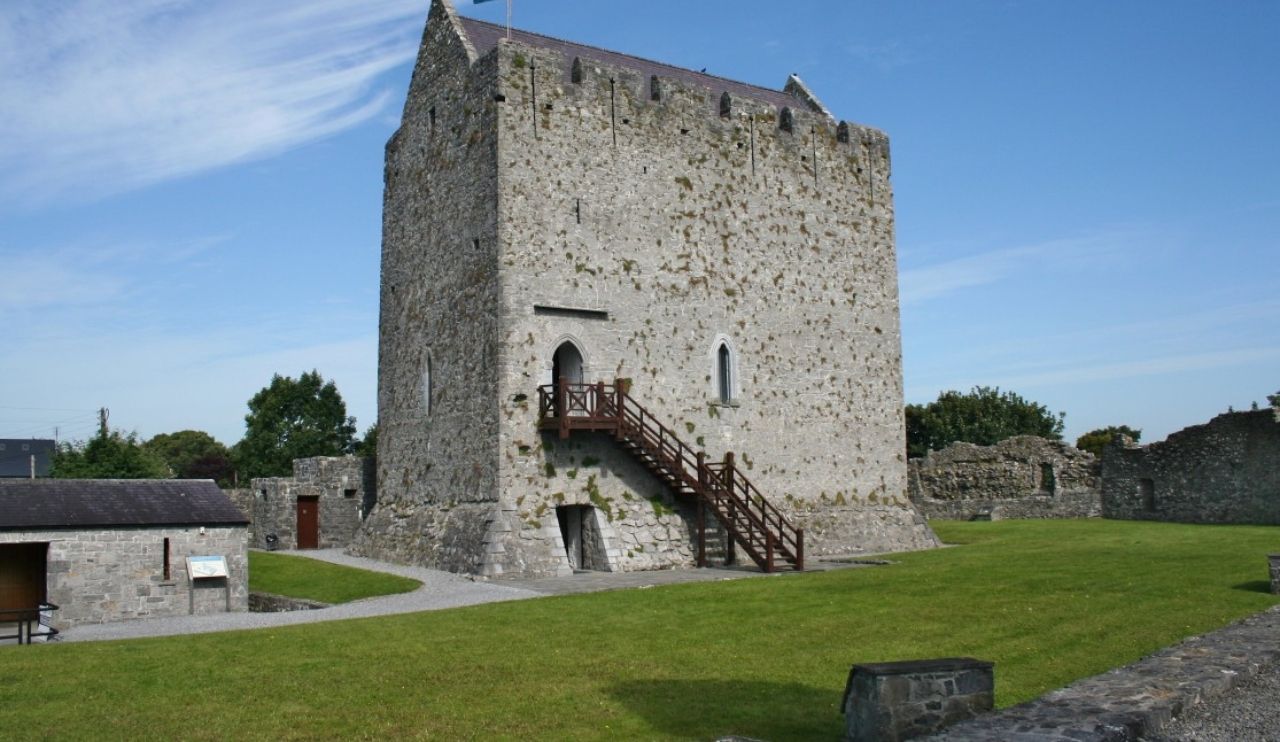 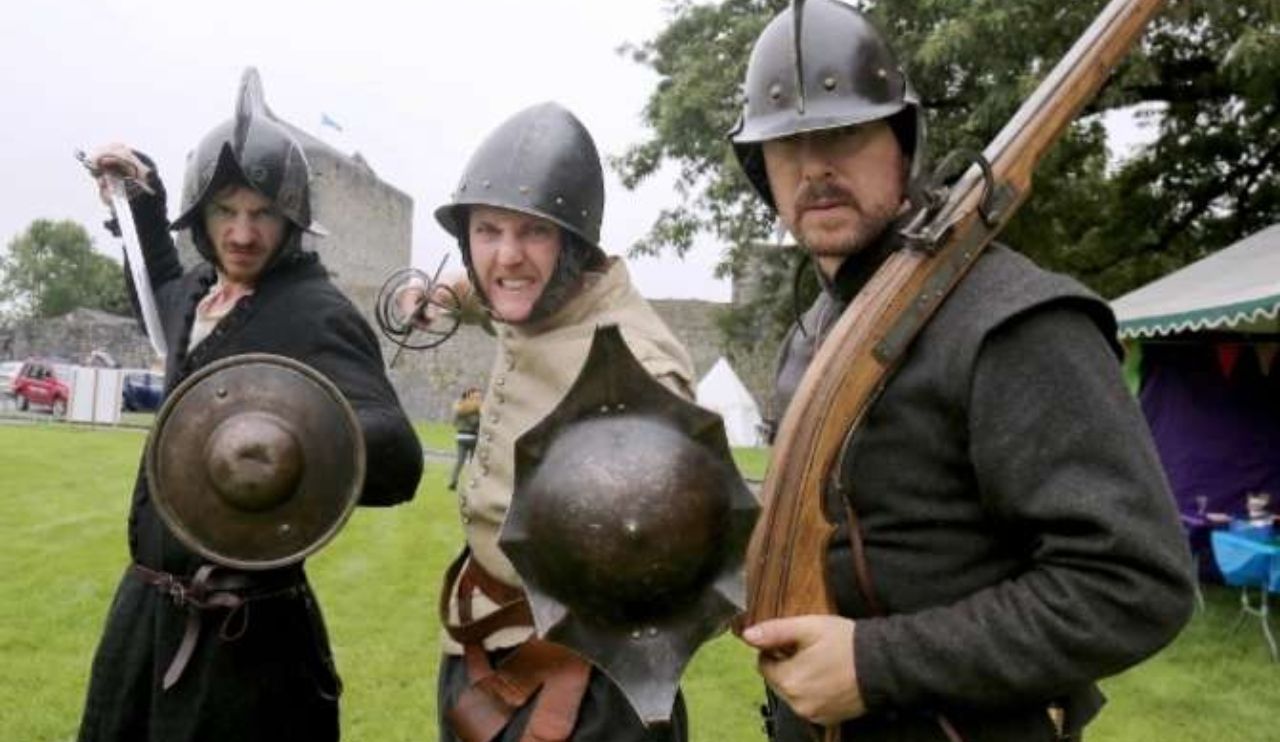 Modern day Athenry retains many of its medieval buildings and features and the award-winning Athenry Heritage Centre brings this Medieval Town to life using models, storyboards and audio-visual touch screen to celebrate and interpret the town's medieval past. The Heritage Centre, situated in the ruins of the Medieval St. Mary's Parish Church, in the centre of town, is the ideal starting point for anyone visiting Athenry.

Athenry is one of the most notable medieval walled towns surviving in Ireland, owing its foundation to Meiler de Bermingham who built his castle here c. 1230. The great three storey tower, surrounded by defensive walls, is entered at the first floor level through an unusual decorated doorway. Recently re-roofed, the interior contains an audio visual room and exhibition. There is access to the ground floor of the castle for visitors with disabilities. For further information click on the link below.

Athenry was walled in the early 14th century. A murage grant was received in 1310 (a murage was a liberty granted by the King to collect monies for walling the town). It is said that the walls were built from the booty collected after the Battle of Athenry in 1316, in which the Anglo-Norman army of Richard de Burgo and Meyler de Bermingham defeated the Irish forces led by Felim O'Connor. It is chronicled that over 8,000 men were killed that day. This battle effectively destroyed the Irish resistance to the Anglo-Normans. This battle took place to the west of the North Gate where today the Presentation Convent stands.

A map dating back to 1583 records four gates to the town. It showed two in the southern wall, with one located in the western wall and one in eastern wall. However a gate dating from the 16th or 17th century remains today in the Northern wall. It is the North Gate and is locally known as "the Arch". It incorporates such features as a murder hole as well as evidence of a heavy portcullis. Most of the original town wall, which is surrounded by a moat, still stands to this day.

Situated behind the famous Spanish Arch, Galway City Museum houses exhibitions which explore aspects of the history and heritage of Galway City. In addition to core exhibitions, the Museum mounts temporary exhibitions and hosts a variety of exhibits from other museums, galleries and special interest groups.

The Museum was opened to the public in April 2007, and boasts spectacular views of the Claddagh, Spanish Arch, River Corrib and Galway Bay. Among the highlights on show is a rare 17th century altar piece, the statue of Pádraig Ó'Conaire, recently relocated here, and the Galway Hooker boat, named 'Máirtín Oliver' by the public.

The museum houses three floors of exhibits and information panels, relating the story of Galway from medieval times to the modern day. The ground floor tells the story of contemporary Galway, with special emphasis on the role that the arts play in the city. The first floor brings medieval Galway alive in a very contemporary way, while the second floor houses an exhibition on the Claddagh village, from post famine times to the early part of the last century.

The Bridge Mills is situated on O'Brien's Bridge, on the banks of the river Corrib. This 430 year old building has been beautifully restored. The building houses several specialist shops. The Bridge Mills celebrates its medieval origins during the summer months with medieval banquets, held nightly, which feature full period dress and entertainment.

The Cathedral of Our Lady Assumed into Heaven and Saint Nicholas was opened in 1965 and is situated on the site of the former county jail. The jail which closed in 1939 was renowned for its cruel treatment of prisoners. The Cathedral is the largest and most impressive building in the city. Most of the raw materials used in the building were supplied from the local area and it is a fine example of Irish workmanship. Inside the visitor will find the cut-stone and woodcarvings and wall paintings, particularly impressive. The style of the building is Hiberno-Romanesque which is unique eleventh century native Irish mode and pre-dates the Norman invasion.

This Park was officially presented to the city in 1710 by Mayor Edward Eyre, from whom it took its name. In 1965, the square was officially renamed "Kennedy Memorial Park" in honour of US President John F. Kennedy who visited Galway shortly before his assassination in 1963. There are two large cast-iron cannon located near the Browne Doorway in Eyre Square. They have been there longer than many of the other memorials in the square. The cannon were presented to the Connaught Rangers at the end of the Crimean War of 1854-1856. The Rangers had played a major part in the Alma Valley Battles in 1854. The fountain located in Eyre Square, is a great example of modern Irish art. The fountain represents the sails of the Galway Hooker which was a traditional fishing boat unique to Galway.

Both a museum and a jewellery shop it is dedicated to the history of the world famous Galway made Claddagh Ring, named after an old fishing area in the City. The rings were worn to indicate marriage but now they are just a token of friendship and are worn by Irish and Irish decedents the world over. The museum is located in Galway City on Quay Street.

Galway Irish Crystal has long been one of the world's best known and loved brands of traditionally crafted Irish lead crystal. Nestled in the heart of the West of Ireland, on the shores of Galway Bay, Galway Irish Crystal is steeped in the rich and diverse heritage of this unique hinterland. Their master craftsmen are continuously inspired by the sheer beauty of the surrounding countryside - Connemara, Galway Bay and Lough Corrib - and influenced by the wealth of history and folklore which is synonymous with Galway. Their beautiful ranges of table top stemware and giftware reflect these influences in their timeless elegance. Their expert craftsmen also specialise in creating individually inspired crystal masterpieces and trophies for special events.

Kirwans Lane is located off Cross Street and is one of Galway's finest examples of its medieval heritage. In the past there was a 100 seat theatre and two nunneries located here. Kirwans Lane has since been restored and now houses several craft shops including the Design Concourse Ireland.

Lynch's Castle, which is located on the corner of Shop Street and Abbeygate Street, is a fine example of a town castle in the country. Town castles were popular homes for wealthy merchants in Ireland in the 15th and 16th centuries. The castle has been beautifully restored over the years. The castle contains beautiful stone carvings on the exterior along with a number of decorative windows. The building is now home to AIB Bank.

Nora Barnacle, wife of James Joyce, was born in the Bowling Green area of Galway. It is said that she provided the inspiration for the character Molly Bloom in ‘Ulysses'. James Joyce was a regular visitor to Galway and has written several poems and articles based in Galway including 'She Weeps Over Rahoon. The house in which Nora Barnacle lived is now a small museum. It is open to the public during the summer with guides available to show you around this special piece of Irish history.

The Saturday market takes place every Saturday in front of St Nicholas Church. It usually finishes early afternoon in the winter. The market provides a variety of goods for sale including fruit and vegetables, cheeses, olives, hot crepes, bread, jewellery, woollens and hand made items to name a few.

The Spanish Arch is located on the banks of the River Corrib where the river meets the sea. It was built in 1584 and was part of the city walls, built to protect merchant ships from looting. In the past it was known as The Blind Arch and is located on the site known as Ceann na Bhalla (The Head of the Wall). A wooden sculpture by Claire Sheridan who lived in the adjacent building during the 50s now adorns the Arch. The Spanish Arch is home nowadays to the Galway City Museum.

NUIG was established in 1845 as Queen's College Galway, and was formerly known as University College Galway. It is one of Ireland's foremost centres of academic excellence and houses over 15,000 students. It has a long established reputation of teaching and research excellence in each of its seven faculties - Arts, Science, Commerce, Engineering, Celtic Studies, Medicine & Health Studies and Law. The stone quadrangle is one of the city's most famous landmarks. The University which is merely a ten minute walk from the city centre, plays an important role in the cultural life of Galway. It is the venue for many musical, literary and sporting events.

Galway Mayo Institute of Technology is a leading 3rd level institution in Ireland. The new facade of this landmark building with its "giant green sails" is located on the East of Galway city. GMIT, formerly the Regional Technical College (RTC) Galway, has made an enormous contribution to the economic, social and cultural life of Galway and the West of Ireland since its opening in 1972, bringing a strong vocational orientation, increased participation in, and an important regional dimension to higher education.

The Institute has gone from strength to strength, expanding to five campuses in Galway and Mayo, currently employing in excess of 1,000 people and catering to some 10,000 students. Students can progress through Higher Certificate, Degree and Masters level awards on to PhD level.

Dunguaire Castle, a 17th century castle is built on a rocky promontory on the shores of Galway Bay on the outskirts of the village of Kinvarra. This restored castle give an insight into the lifestyles of the people who lived from 1520 until modern times. Medieval banquets are held nightly during high season.

Kylemore Castle, built in 1868, is one of the great baronial-style Castles remaining in Ireland. In 1920, the Castle was turned into an Abbey when it was purchased by the Irish Benedictine nuns. Visitors to the three reception rooms in the Abbey are touched by its history steeped in romance and tragedy.

Visitors are also welcome to the recently-restored neo-Gothic church (circa 1871), Mausoleum, Restaurant and Craft Shop. A complimentary shuttle bus will take visitors to the beautifully restored Victorian Walled Gardens. 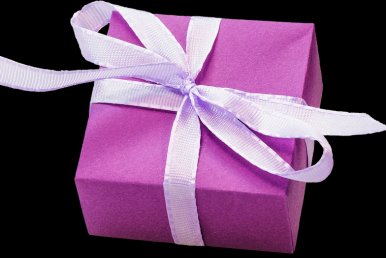 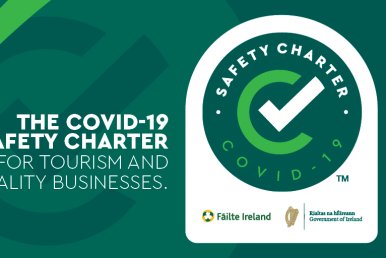